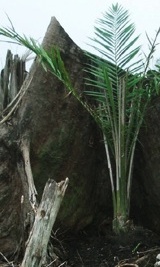 Biodiesel or biofuel is a fuel produced from plants. It is renewable (unless there is land enough). However, this doesn't mean it is environmentally friendly, exactly because the there is not enough croplands in the world.

The expansion of biofuel production involve additional land use. Even modest usages of biodiesel would consume almost all cropland in some countries in Europe. Switching to biodiesel on a large scale requires considerable use of arable area. And lthis and area is taken up from forests or from food cropland.

When burned, biodiesel emits less carbon than diesel or gasoline, but the damage has already been done. Biofuel became one of the most environmentally damaging commodities on the planet.

To expand monoculture of soy in South America, agribusiness companies destroyed large sections Amazonian forest and Cerrado (tropical savanna abustiva along the Amazon rainforest, vital to many animal species).
The expansion of palm oil production is one of the leading causes of rainforest destruction in south-east Asia. In Indonesia and Papua New Guinea are the Malaysian companies to drain the swamp forests and peat bogs, then burn and then make palm oil plantations, while millions of tons of peat going up in smoke, entering into the atmosphere huge amount of carbon was calculated that, for this reason Indonesia has become the fourth largest emitter of greenhouse gases. Oil palm plantations are now expanding in Africa and South America.

Much rainforest clearance in Indonesia is taking place on peatlands, which yields massive additional carbon emissions as the rich organic peat oxidizes or burns. With the loss of rainforest ecosystems we lose one of the planet's greatest carbon capture and storage systems and best adaptation mechanisms for global warming (up to 300 tons of carbon per hectare).

A paper published in Nature in July found that Estonia had one of the highest rates of forest loss in Europe—after an abrupt increase from 2016 to 2018 that raised the rate of clearing by 85 percent over what it had been in the previous decade. The surge was largely brought on by demand for wood pellets for bioenergy, the authors of the study found.

Burn it, burn it all!

The European Union’s new renewable energy policy damages its ambition to become the world’s climate leader. The new Renewable Energy Directive agreed on today will apply for the period 2021 – 2030 and will continue to incentivise current destructive practices: increasing forest harvests, the burning of whole trees and stumps, and large scale use of biomass in inefficient electricity installations.

Better utilization of its vast areas of pasturelands could enable Brazil to dramatically boost agricultural production without the need to clear another hectare of Amazon rainforest, cerrado, or Atlantic forest, argues a new study study published in the journal Global Environmental Change. Modeling agricultural yield potential, Brazilian researchers from the International Institute for Sustainability, Brazil's agricultural research agency Embrapa, and the national space research agency INPE find that Brazil could turn more than 30 million hectares of land that is currently pasture over to more productive crops, increasing overall agricultural output.

New study dispels assumption that burning forest residues for energy is carbon neutral. Burning wood in power plants will significantly undermine efforts to reduce greenhouse emissions over the next 10 – 50 years even under industry best-case scenarios where only forestry wastes are burned as fuel, according to a study published in Environmental Research Letters.

Electricity production from solid biomass sourced in North America could in some cases emit more CO2 than coal-fired power generation, according to a report published by the UK’s Department of Energy and Climate Change (DECC).
The report finds that when naturally-regenerated forests are harvested at a greater rate for example, the emission intensity of the electricity generated is between 1,270 to 3,988 kilograms of CO2 equivalent per MWh, which is greater than coal.