When the logging industry comes

When the logging industry comes 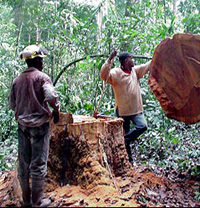 Indigenous peoples and local population has no say in the granting of logging concessions. For them, the beginning of logging operations comes as a surprise, which drastically changes village life. Socially, the forest industry doesn't bring any sustainable development to the region. The forest industry directly or indirectly causes an increase in health problems.

The moment logging operations or the building of a sawmill commence, the population starts to grow rapidly: villages grow into little towns, but infrastructure or food supply hardly follows the trend: food prices rise considerably because local supplies are insufficient. The logging causes a shortage of other forest products (game for local consumption, fruit, oil etc.). Logging company employees and passing lorry drivers regularly steal from vegetable gardens and cassava plantations. The invasion of poachers hunting the local game on a large scale, to sell it to logging companies or in the cities, causes a strong irritation among the local population. They see their own game resources disappearing and their food supply endangered, but the logging companies do not compensate the damage.

When the law provides for the logging company to organise consultations with the locals before starting operations, logging companies promise to build medical facilities, repair bridges, lay out soccer fields, etc. These promises are either not kept, or carried out partly or badly. The infrastructure (schools, medical centres, etc.) that had been set up during the logging operations, are no longer maintained.

Even as to employment, the logging activities don't bring any stability to the region. Because of the destructive techniques practised, the operations are systematically moved as soon as the concession is depleted. Villagers employed in logging or in the sawmill are left behind without job.

Scientists see a clear relation between the logging industry's expansion and the growth of prostitution . HIV-contamination and alcoholism spread alarmingly fast.
The heavy freight traffic also causes many health problems in people living along the forest roads. Eight months a year, villages are permanently covered in thick clouds of dust raised by the lorries hurling by. Scientists mention an increase in respiration problems. Accidents are very common. Lorries thoughtlessly charged often lose their logs, sometimes crushing gardens, houses or people.