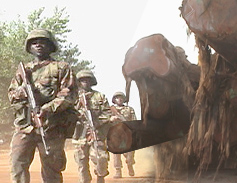 Timber is one of the commodities easily traded to fuel armed conflict. Weapons follow often the same routes of logs along the path opened by companies in the forest. Ships carrying logs comes back loaded with weapons.
Timber is a relatively easy commodity to extract. Chopping down a tree is much easier than exploiting nickel or oil. Timber stay on the surface, it is not hidden, does not requires huge investment such as oil, gas or precious metals. Few soldiers with a chainsaws and trucks are able to obtain hundreds of thousands of dollars in short time. A better organized company can easily obtain hundreds of millions od dollars.
Timber companies that keep doing business with conflict timber, become actively or passively partner in crimes such war, arms trafficking and human rights violations.