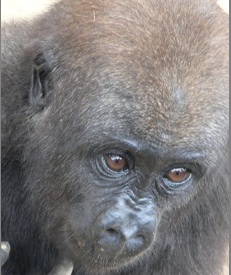 World forests are home to a large number of the world's plant and animal species, including many endangered species. They are the habitat for about two-thirds of terrestrial species. As forests are cut down, many species are doomed to extinction. Some rainforest species can only survive in their natural habitat.

Tropical rainforests support the greatest diversity of living organisms on Earth. Although they cover less than 2% of Earth's surface, rainforests house more than 50% of plants and animals on Earth. Here are some examples of the richness of rainforests:
- rainforests have 170,000 of the world's 250,000 known plant species
- the United States has 81 species of frogs, while Madagascar which is smaller than Texas, may have 300 species.
- Europe has 321 butterfly species, while a park in the rainforest of Peru, Manu National Park, has 1300 species.

According to the IUCN there are now almost 45,000 species considered at risk of extinction. Our¬†closest relatives in the animal world: chimpanzees, gorillas and orangutans, are destined to become extinct within the next few decades if we continue to destroy the forests that host them. Every day, 50 to 130 species¬†become extinct.¬†We are facing the most dramatic wave of extinctions since the disappearance of the¬†dinosaurs 65 million years ago.¬† An ecological disaster is happening at an unprecendented rate; previous crisis played out over millions of years, and in the presence of natural disasters.

554 scientists wrote a letter to the European institutions urging them to assure "protection and restoration of natural forests is beneficial both for the climate and for biodiversity". Between "conservation of biodiversity and addressing climate change and, on the other hand, the short-term economic gain provided by logging" they say, "the former should prevail. Therefore, we urge the commission to take immediate steps to drastically reduce logging throughout the EU."

La Andersen said humanity was placing too many pressures on the natural world with damaging consequences, and warned that failing to take care of the planet meant not taking care of ourselves. Leading scientists also said the Covid-19 outbreak was a “clear warning shot”, given that far more deadly diseases existed in wildlife, and that today’s civilisation was “playing with fire”. They said it was almost always human behaviour that caused diseases to spill over into humans.

Human society is in jeopardy from the accelerating decline of the Earth’s natural life-support systems, the world’s leading scientists have warned, as they announced the results of the most thorough planetary health check ever undertaken. From coral reefs flickering out beneath the oceans to rainforests desiccating into savannahs, nature is being destroyed at a rate tens to hundreds of times higher than the average over the past 10m years, according to the UN global assessment report.

The tragedy of too small forests

Biodiversity loss is the biggest environmental problem we face today, according to a UN report that came out last year. One of the main reasons is that large forest areas are disappearing due to human impact. A lack of connected forests can prevent trees from multiplying efficiently. The more fragmented the forest becomes, the greater the problem for the trees. “Forest fragmentation has a negative effect on seed dispersal by means of animals,” says Emma-Liina Marjakangas at the Centre for Biodiversity Dynamics (CBD) at the Norwegian University of Science and Technology (NTNU).

Ancient termite megapolis as large as Britain found in Brazil

Researchers have discovered a gigantic complex of 200 million termite mounds in northeastern Brazil, which may be up to 4,000 years old and covers an area about the size of Great Britain. Although visible on Google Earth, the conical mounds, some of which rise up to 10 feet high, are largely hidden from view at ground level in semiarid, thorny-scrub forests, according to research published this month in Current Biology.