Is the new policy announced by paper giant Asia Pulp & Paper' (APP) a milestone in protecting rain-forests? or is it "artful deception" as portrayed by Greenomics Indonesia? According to a report released by the Indonesian NGO, the new policy came after the forestry giant had already cleared nearly all of the natural forests available in its concessions in Sumatra. The report is based on analysis of Ministry of Forestry data and satellite imagery for ten APP companies in Riau, Jambi and South Sumatra on the island of Sumatra. 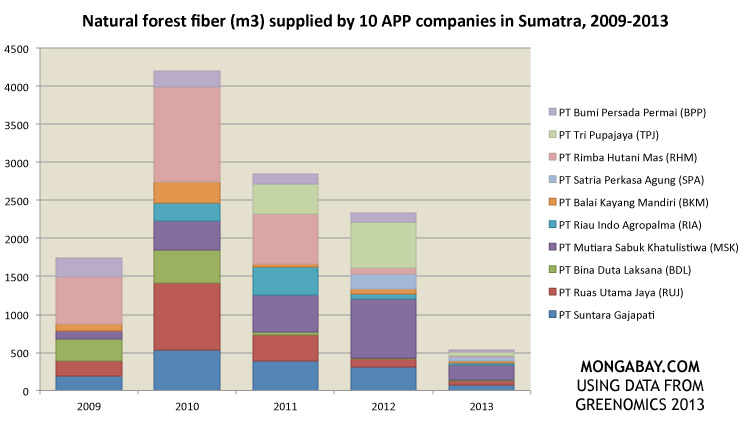 Greenomics argues that the findings suggest that APP waited until after it had cleared as much forest as possible before establishing its forest conservation policy, which limits conversion of high carbon lands, high conservation value forest, and conflict zones. http://mongabay-i

"It would appear that commitment to the New APP Forest Conservation Policy was delayed until the clearance of natural forest and forested peatland for the development of pulpwood plantations had been completed." concludes the report "The natural forest fiber resulting from such clearances has come in very useful as a source of raw material for APP operations, particularly for 2013."

"Between our APP team, The Forest Trust (TFT) and HCV assessors, we have over 200 people working on the ground right now," Aida Greenbury, APP Managing Director for Sustainability, told mongabay.com. "They are tasked with mapping natural forest boundaries and the complex process of HCS and HCV evaluations."

"Our initial satellite image analysis on the 15 concessions which were converting natural forests prior to February 1st 2013, shows that, as a result of our Forest Conservation Policy, there are substantial natural forest areas left protected throughout Sumatra and West Kalimantan. We will continue to report our progress as each element of our program is completed." Greenbury added that initial analysis from TFT suggests the amount of forest which will be protected as a result of the new policy is between 150,000 and 250,000 hectares across the two islands.