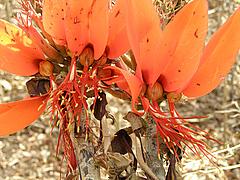 They were considered extint twice, but they still hare there. Scientists from the University of Dar es Salaam have confirmed the rediscovery of two tree species that were feared to have become extinct twice, according to a report published in the Journal of East African Natural History. The finds were made in highly threatened fragments of dry forest in coastal Tanzania.

One of the trees, Erythrina schliebenii, belongs to the genus of 'coral trees' which have spectacular red flowers and viciously spiny trunks. The tree was only known from two collections from the 1930s until it was recollected in a small patch of unprotected forest in 2001. It was feared that it might have gone extinct again when a Dutch company cleared part of that forest for a biofuel plantation in 2008.

The other tree, Karomia gigas, was only known from a single specimen cut down a few years after it was first discovered in coastal Kenya in 1977. Another tree was found some 600 km away in a tiny fragment of forest in Tanzania in 1993, but a more recent search at the same site was unable to relocate it.

The coral tree Erythrina schliebenii was collected with mature seeds for the first time, allowing taxonomists at the Royal Botanic Gardens in Kew to confirm it as a distinct species. This was only possible through consulting reference collections of coral tree specimens housed in herbaria throughout the world.

Neil Burgess, senior advisor to WWF’s conservation and Africa programme, said: "The re-discovery of these two trees highlights the lack of information in a forested region where we could be losing species without ever knowing they are there." Recent infrastructure development, together with a rapid population increase, are putting the coastal forests of southeast Tanzania under increasing threat of being degraded and cleared.

"Erythrina schliebenii has only survived because it grows in rocky areas that are not usually cleared for cultivation, but even those areas will be cleared one day if nothing is done," added botanist Cosmas Mligo from the University of Dar es Salaam.